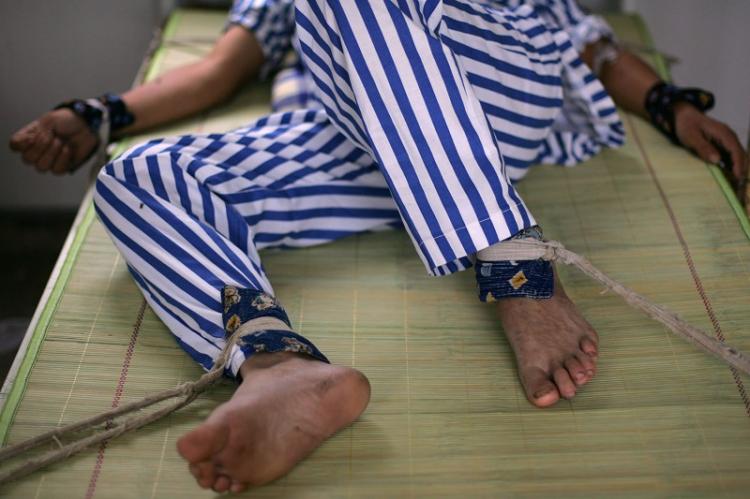 The National Mental Health Law – a law that was reportedly highly publicized in 2013 – was meant to end a barbaric practice in China: the confinement of critics, petitioners and undesirables by police to mental institutions best described as hellish prisons. .

A new report from the NGO Safeguard Defenders shows that the problem persists and that there is no protection for victims.

“Ankang,” meaning peace and good health in Chinese, has been used to describe a system in which police can forcibly place people in institutions, most often without even an initial psychiatric assessment. It started in the 1980s as special police-run mental institutions outside the normal mental health system. Once inside, it is nearly impossible to get out. It persists to this day, even though the name has changed.

Some victims languish indoors for years without ever experiencing mental health issues, as authorities have found it a convenient way to get a problematic person out. Inside, victims are deprived of the most basic protections, unlike detention centers or prisons.

The new report, mapping 109 facilities that have been used in this way in 21 provinces, found that two-thirds of those locked up by the police received no initial psychiatric assessment. Most of the identified victims were either dissidents or petitioners, a long-standing thorn in the side of local governments.

Petitioners, often those from local townships or the countryside, take their grievances to Beijing and provincial capitals to fight a perceived injustice, often linked to local governments stealing their land for a quick profit. They embarrass the authorities. The same local governments employ a legion of agents to guard train stations, maintain offices in Beijing, and even so-called “black jails” in Beijing and elsewhere, where found petitioners are placed before being forcibly returned to their homes. hometown. For those who refuse to give up, these Ankang facilities are the last resort. Unlike arrest and imprisonment, this leaves little paper trail and the victim has no rights.

Once locked up in a facility in Ankang, the victim has virtually no way out, regardless of their health. Physicians within institutions are obliged to cooperate or to do so of their own free will; the result is still the same.

The report, to my surprise, shows how serious the violations inside the facility could be – ranging from forced medication to beatings, being tied to the bed for long periods of time, to electroshock therapy, and most victims are denied visits or contact with family and friends. For many, this does not last weeks or months, but years, and it is not uncommon for people to spend more than a decade in such facilities.

In rarer cases, but accounting for almost 10% of identified cases, family members actually cooperated with the police to have the victims incarcerated against their will, despite posing no danger to themselves. or for others.

Dong Yaoqiong caught the world’s attention after splattering ink on a propaganda poster of Chinese leader Xi Jinping. Deng Fuquan was a former soldier who filed a petition against the denial of compensation for treatment of injuries sustained while serving in the People’s Liberation Army. Song Zaimin posted public support for CCP critic Guo Wengui. Li Tiantian, a young girl, publicly supported a teacher who was punished for calling on his students to question the official historical accounts established by the CCP.

All met in Ankang.

Despite the Mental Health Act, which is supposed to specify that no one can be committed without a proper initial psychiatric assessment, the police can apparently place people in psychiatric incarceration without ever having to worry about it, and the victims, kept in secret once inside, have no means of appealing or fighting such a violation of the law. And one can assume, after the abuse, that the victims might even lose their will to fight even if they could.

Your only way out is to ask the authorities to let you out. But why would they, unless you give them everything they ask for, and maybe more?

Ankang is a relic of a dark past and should have no place in China or anywhere else today. Ankang is better called hell rather than peace and health.

Peter Dahlin is the founder of the NGO Safeguard Defenders and co-founder of the Beijing-based Chinese NGO China Action (2007-2016). He is the author of “Trial By Media” and contributor to “The People’s Republic of the Disappeared”. He lived in Beijing from 2007, until he was detained and placed in a secret prison in 2016, then deported and banned. Prior to living in China, he worked for the Swedish government on gender equality issues and now lives in Madrid, Spain.