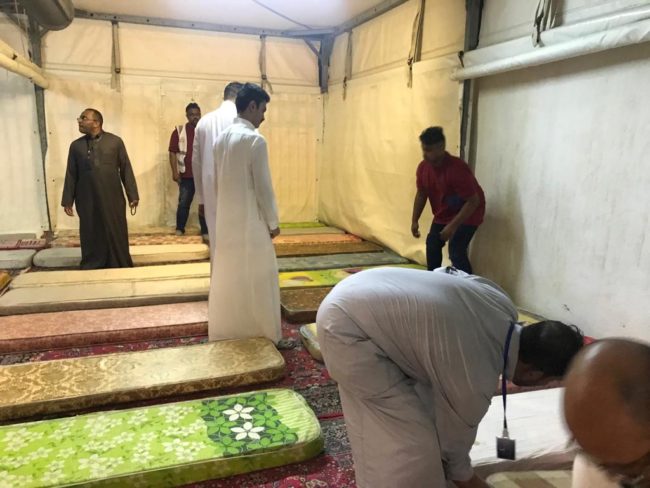 Hajj 2022: NAHCON expresses satisfaction with Muna facilities and assures pilgrims they are ready

Three days before the start of this year’s Hajj, the National Hajj Commission of Nigeria (NAHCON) expressed its satisfaction with the facilities set up in Muna, also known as Tent City, by the Saudi authorities ahead of the arrival of pilgrims from Thursday. evening.

The Hajj body has also assured Nigerian pilgrims of its willingness to ensure that they enjoy their stay during the Hajj period, which is the fifth pillar of Islam.

NAHCON Deputy Coordinator for Makkah, Alhaji Alidu Shuti, expressed satisfaction with the facilities, on behalf of the commission’s Chief Executive Officer (CEO), Alhaji Zikrullah Kunle Hassan, when he led some officials of the Hajj organization to inspect the level of preparation for the Hajj exercise.

Speaking to reporters after inspecting the facilities including toilets, kitchens, waste management vehicles among others, Shuti said he was pleased with what the tram saw on the ground, saying there are had a number of unique differences to what was currently on the ground.

According to him, the NAHCON field workers responsible for caring for the Nigerian pilgrims had been on the ground for three to four weeks trying to put everything in place to take care of the pilgrims.

“I went around and saw the offices being prepared for the pilgrims. If you see the restrooms in the past and see them now, you will see that there is a facelift from what they were. Even the arrangements, everything is in order,” Shuti said.

He said part of the improvement was the reduction in the number of a team of pilgrims to throw stones at the Jamarat from 250 to 90.

This, he said, “will enable pilgrim guides, those who guide pilgrims, to be able to give them effective coordination and effective services. This is part of what makes Hajj 2022 unique in terms of administration.

He informed that to ensure that the pilgrims could perform their act of ibadah (worship) very well, NAHCON had engaged the services of notable ulama to teach them (the pilgrims) what was expected of them during the pilgrimage.

“Pilgrims come to the Kingdom (of Saudi Arabia) for ibadah and this takes place in Mashai. The National Hajj Commission of Nigeria has engaged notable scholars, nitabke Ulamas, versed in Islamic knowledge.

“These ulema moved from hotel to hotel teaching our pilgrims what is expected of them when performing Hajj Mabur,” he said.

Shuti added, “I would like to assure the entire (Nigerian) contingent up to Hajj 2022 that NAHCON has worked out arrangements to ensure that they enjoy their stay in the Kingdom.”

He, however, asked the Nigerian pilgrims not only to fear Allah but also to be good ambassadors of Nigeria to Saudi Arabia and urged them to obey the rules and regulations of the host country.

“And most importantly, I want to urge them to be good ambassadors of Nigeria in this Kingdom of Saudi Arabia because we are the guest of Allah here. And as guests of Allah, the host country has rules and regulations.

“We must try as much as possible to conduct ourselves in tandem with the rules and regulations of the host country,” advised the deputy coordinator of NAHCON Makkah.

Continuation of the pruning of the exemption of services on the map: secretary of the tax department